Rose’s interest in science and technology led to a 20-year career in different areas of applied physical science.  Her work ranged from a meteorologist for the National Severe Storms Laboratory to a manager developing the ground system for the Hubble Space Telescope.  As interesting as her career was, Rose found that she wanted more time to focus on her most rewarding scientific endeavor: exploring her relationship with God.

“In my talk I will draw parallels between how physical scientists approach the subjects they study and how individuals approach the study of Christian Science,” says Rose.  “One of the most fundamental laws in the practice of Christian Science comes from the book of First John in the Bible: ‘God is love.’  That is a powerful law that has healed me physically and mentally.  I’ll share examples illustrating that law in action.”

Rose’s ideas are based on the teachings of Jesus as recorded in the Bible, and as discussed in Science and Health with Key to the Scriptures, by Mary Baker Eddy.

In 2002, she made the transition from manager, engineer, and earth scientist to the full-time ministry as a Christian Science practitioner.  She is now an authorized teacher of this Science and a member of the Christian Science Board of Lectureship. 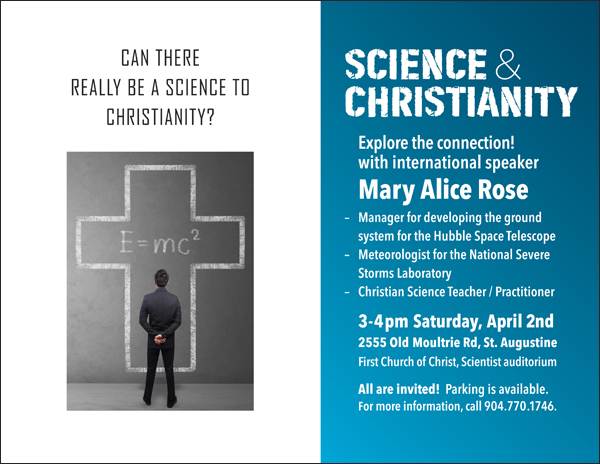 This entry was posted in Uncategorized, Your Daily Bread (Blog). Bookmark the permalink.